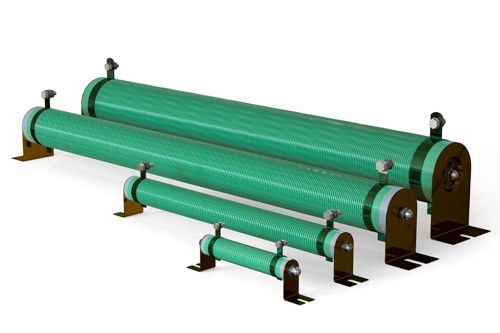 Braking resistors for other drives

Braking resistors in electric motor drives are mainly used in the construction industry [lifts, cranes, conveyors, overhead cranes] and are used to discharge braking energy, the excess of which can not be returned to the power network.

Frame Motors speed control through frequency converters – inverters is a widely used method of controlling drives. One of their advantages is the return of energy during braking. In such situation the motor works as an electric generator, returning current to the power network.

In many situations, however, the braking current may exceed the critical value and damage the DC circuit elements of the inverter. Then, a braking resistor is used that dissipates excess energy, converting it into heat.

Braking resistors made by SIMPAX in drives are used in national and international construction, mining and maritime industries for over 30 years [see "History"]. For the production of braking resistors SIMPAX applies the latest technologies that meet the highest requirements in terms of quality and durability, and advanced 3D modeling, thanks to which we can design in a short time any type of resistor corresponding to individual requirements.

SIMPAX is also known for the production of replacement resistors for older type of braking resistors of all manufacturers. We have unique experience in the production of braking replacement resistors for cranes and overhead cranes manufactured in the countries of the former Soviet Union, as well as Czechoslovakia, Hungary, Romania, Bulgaria, Ukraine, Yugoslavia and India, Egypt and Lebanon. [see REPLACEMENT RESISTORS]